FROM THUNDER TO BREAKFAST 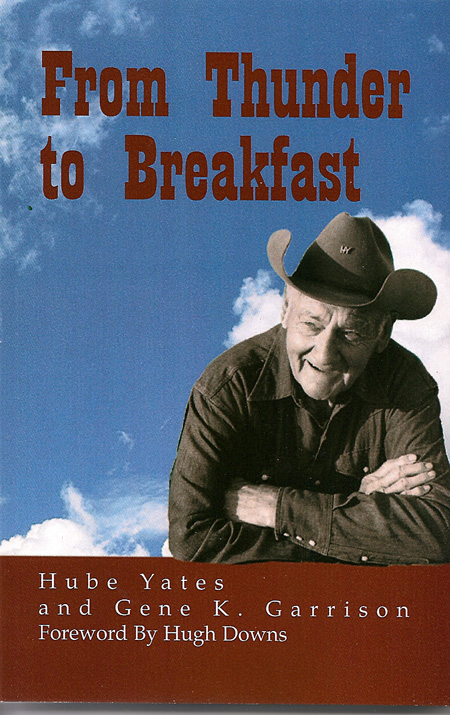 From Thunder to Breakfast, a strange name for a book, but that’s the title I chose for my first book, and it’s not a cookbook.  It’s a Hube Yates memoir. When Roger Naylor interviewed me about my books, he nailed it when he opened his article with “Gene Garrison could talk about Hugh Downs, Dick Van Dyke or Hube Yates, but she didn’t want to talk about anyone but Hube Yates.  Who the heck is Hube Yates?”

By the time we finished the interview he knew who Hube Yates was — a pioneer from Oklahoma to Arizona in 1914, when he was eleven years old. He came with his large family of nine — mother, father and six brothers and sisters.  They were moving with all their possessions, including horses and mules, food, clothing and even a small pump organ.  Dad, incidentally, was a preacher, a character himself.  Little Hube must have inherited his storytelling ability from him.  His humor drew people to him like flies to a picnic. I noticed it the first time I met him, arranged an interview and wrote an article which sold the first time out.  Then we made a deal: we would write a book.  He would be the storyteller and I the author.  The process was absolutely delightful. I wrote the book in first person using all of Hube’s charming colloquialisms, and even grammar slippages every now and then.

I wrote queries to about a half-dozen publishers, who all turned it down.  I didn’t have sense enough to know that six contacts was not nearly enough, so I decided to publish it myself.  I really didn’t want to become a publisher, but I also didn’t want to waste all that work. All this took place in the late 1970s, when I was also feature articles writer for an elegant local magazine.  As an afterthought, I offered my manuscript to that editor but she also turned it down. After I sent her our published book she said, “I was wrong.  It’s a good book.”  I glowed.

What felt even better was the sight of dozens of people waiting in line for our autographs at book-signings. We sold our several-thousand-book-order in seven months, largely due to Hube’s personality—and, of course, the charming book. Did I tell you that Hugh Downs wrote the Foreword?  Nice of him.